Home › Elections › The Big Question or just patronising? – ‘Can you be a Christian and vote for UKIP?’

The Big Question or just patronising? – ‘Can you be a Christian and vote for UKIP?’ 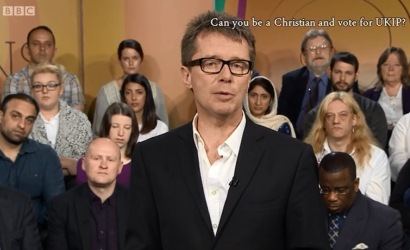 Last Thursday I was invited to appear on BBC1’s The Big Questions on Sunday morning. The subject I was asked to discuss was ‘Can you be a Christian and vote for UKIP?’ I’ve had a few requests for media appearances now and I’m still at the stage where I get excited when I read the invite, but despite this it’s still rare that I’ll jump in and say yes straight away. The problem comes down to what I’m expected to say.

One of the pieces of feedback I often get from regular readers of this blog is that it’s generally balanced and doesn’t exaggerate the truth. This is entirely deliberate. My thinking is that if Christianity has intrinsic value, then its claims and the faith of believers shouldn’t need to be distorted in order to get the message across powerfully. If Jesus claims to be the only way by which we can come directly to God then his words need to stand on their own feet if they are true. This also means that I’m not afraid to present both sides of an argument and leave them to speak for themselves.

When it comes to voting, I’ve written plenty about the way different Christians can find themselves legitimately siding with different parties (with the exception of the BNP and others who advocate hate) despite sharing the same faith. So to be on a programme, which is known for having deliberately polarised debates, often with guests who hold staunch views, talking about a very grey subject and probably being expected to have a strong opinion one way or the other, doesn’t fill me with excitement. As it happens I’ve been heavily involved with a conference which has included speaking commitments over the last few days (this is why things have been quiet on the blog recently) and it wasn’t feasible for me to appear.

If I had been available, what would I have said? I certainly think that Christians can vote for UKIP and it has not been difficult finding some who did on Thursday. However I don’t really want to be on national TV seen to be promoting the virtues of UKIP either. The Big Questions is certainly not as high brow and informed as Radio 4’s Moral Maze where a subject is thought through in a fairly calm and reasoned way. It’s much more like a frenetic Radio 5 phone-in which leaves the viewer feeling anything but educated and enlightened.

Sitting down to watch it on iPlayer the next day, initially my worst fears were confirmed as a black Methodist minister went head to head with UKIP’s Commonwealth spokesman who is also black and a Christian. Most of the argument centred around racism and immigration and whether the perception of UKIP as a racist party bears any resemblance to the truth.  You could have quite easily taken the ‘Christian’ element out and ended up with basically the same debate with any two people who express similar political views. Nicky Campell as the host did his best to  bring the subject matter back to Christian belief, but the statements on his prompt cards were so superficial that the guests didn’t latch on to the bait: “Nigel Farage has said some pretty controversial things: He was on a train and no one was speaking English. Can you imagine Jesus going into a market place saying, “There’s no one speaking Aramaic here!””

Campbell, having brought up UKIP’s stance on gay marriage at one point went on to ask whether some right-wing American evangelicals who oppose homosexuality should be called Christians. It wasn’t really relevant to the conversation and the response from the Methodist minister was that there are all sorts of people who would describe themselves as Christian, but it doesn’t mean a great deal if it’s little more than a label you give yourself. It also highlighted the point that asking whether Christians should or shouldn’t vote for a particular party is impossible unless you put some parameters in place, otherwise you are simply asking whether any decent citizen can vote in that way.

Surprisingly the most sensible comments of the entire session came from Lembit Opik – once known for being a Lib Dem MP and going out with a Cheeky Girl, but now a fully signed up Christian. He was on to discuss whether you should be able to delete your past on the internet, but decided to jump in to confront some poor thinking:

“It is disingenuous when people say a political party is not Christian. UKIP has been demonised to an extent and these sort of things don’t do credit to politics… When people talk about it not being a Christian organisation, that’s not fair. You can have different views on immigration, but still have a faith… These are difficult issues to wrestle with. To preclude people of Christian faith – or other faiths – from any one party is patronising and offensive because you can have any political view and still have a faith.”

One of the key frustrations when the media presents a ‘balanced’ debate is that having two parties with black and white views from either end of the spectrum is rarely balanced at all. It’s often those who are able to hold two supposedly opposite views in tension and find where their strengths and weaknesses lie who are able to give answers that have the most value. I was once asked if I would go on ITV’s Daybreak to discuss a case involving Christian bed and breakfast owners who had turned down a gay couple. Because I was Christian but wasn’t willing to fully defend the owner’s actions, I was told that I wasn’t what they were looking for, i.e. my opinion wasn’t extreme enough. Setting up this sort of clash might make for more entertaining viewing, but it doesn’t do anything to promote religious literacy and understanding amongst the public.

The media works with a double-edged sword. It has the ability to put your voice in front of thousands and millions of people, but depending on how your message is allowed to be presented, it can do more harm than good and with cases such as the false MMR-autism link from a few years ago, the damage can be considerable.

This is an issue for anyone who accepts media exposure. There will be inevitable difficulties along the way and there are risks, but is that sufficient reason to disengage if you have something worth saying? If I’d had a choice it would have been too easy to dismiss the Big Questions appearance complaining that more moderate opinions are rarely aired and given a fair hearing. If those in similar shoes do the same though, we can’t complain if those views aren’t represented enough. We need to be willing to overcome our discomfort and stick our necks out when the opportunities do come, whether that be on the BBC or in one-to-one conversations.

Fortunately on this occasion Lembit Opik was there to  speak some sense into the situation, but the fact that the best guest wasn’t there specifically to talk on that topic also says something profound about the way debates like The Big Questions are run.

Like Loading...
‹ One pregnant Christian’s death sentence in Sudan is relevant to us in the UK too
Marriage preparation is not just for the big day – it’s for life ›