It is always a pleasure to see politicians laying aside their differences and uniting in celebration of good things.

Labour leader, Ed Miliband and Conservative International Development Secretary, Justine Greening have done just that by recording the above video to lend their support to this year’s Christian Aid Week, which is the largest single act of Christian witness in the UK.

In the video the two MPs have praised the efforts of Christian Aid supporters and thank those who spend the week raising money for the organisation’s work with the world’s poorest people.

Mr Miliband said: ‘I know there will be about a hundred thousand volunteers for Christian Aid going out and raising money in this week and I want to say to them, thank you, because it is an incredible thing that you are doing.

‘You’re the social conscience of the country, you care about people around the world and you are showing it in action by the work you do for Christian Aid.’

Mrs Greening said poverty alleviation was vitally important for people both abroad and at home.

‘Together we really can make a big difference and I think that’s why the work that Christian Aid does is so important,’ she said.

‘It’s why Christian Aid Week is such a fantastic opportunity to get out there, talk to people in our country about the work Christian Aid is doing but also why this broader work of development and helping lift people out of poverty is so important for all of us.’

The theme of this year’s Christian Aid Week is Tackling Violence Building Peace and focuses on the millions of people whose lives have been torn apart by conflict.

Mr Miliband said: ‘We know so many people live in a war torn world, finding themselves dislocated, finding members of their families who are victims of violence and who they lose in conflict.  And therefore Christian Aid’s theme of this week is an incredibly important theme for healing our world, making it a safer, securer and fairer world.’

Mrs Greening said: ‘We’ve worked hand in hand on the ground with Christian Aid in neighbouring countries with Syria that have refugees. That work is critical and it’s work that will make a difference in the long term’. 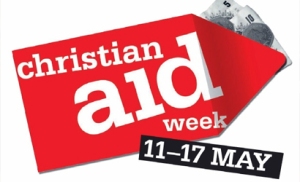 In keeping with this year’s theme, Christian Aid’s Head of Middle East Region, Janet Symes has written exclusively for God and Politics on her experience of visiting a Syrian refugee camp in northern Iraq and the difference the money given to Christian Aid can make for thousands finding themselves in such desperate situations. It can be read here.

Like Loading...
‹ Does this make you angry too? – The real point of Christian Aid Week
Taking on the exploitation of payday lenders is a Christian calling ›