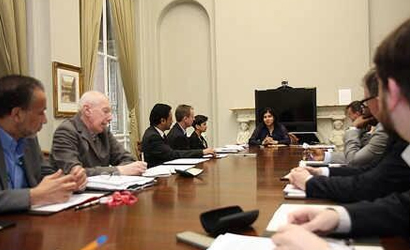 Yesterday the Minister for Faith & Communities, Baroness Warsi chaired the first meeting of the Foreign Office group on Freedom of Religion or Belief. According to the Foreign and Commonwealth Office (FCO) website, the group, which includes Mervyn Thomas, chief executive of Christian Solidarity Worldwide and Joel Edwards, the International Director Micah Challenge, is intended to advise FCO Ministers and staff on promoting and protecting the right to freedom of religion or belief worldwide. Referring to the meeting, Baroness Warsi gave this quote:

“Freedom of religion or belief is a personal priority for me. Across the world, people are being singled out and hounded out simply for the faith they follow or the beliefs they hold. The persecution of people because of their faith or belief has, I believe, become a global crisis. I want to make sure we have the best advice available. This is why we have set up this new Advisory Group, made up of real experts in the field, and of those who are working every day in practical ways to defend the right to freedom of religion or belief. I look forward to working with them as we seek to move towards a world where no-one is persecuted for what they believe.”

The establishment of this group is a welcome sign that after years of waiting and lobbying by (mainly Christian) organisations, the Government is continuing to slowly wake up to the need to address the crisis of persecution that affects millions of people around the world simply because of the beliefs they hold. Much of the credit for this group coming into existence needs to be attributed to the tireless work of Christian Solidarity Worldwide, Barnabas Fund, Open Doors and others for continually raising the plight of so many.

Members of Parliament will shortly be receiving a copy of the latest Advocacy Report from Open Doors. Freedom of Religion and the Persecution of Christians is the 2014. It is based on the extensive research behind the well-respected Open Doors annual World Watch List, which highlights the 50 countries where it is hardest to be a Christian.

Zoe Baldock, Head of Advocacy at Open Doors has said: “While the report indicates that it is not the only source of persecution, the main engine driving persecution of Christians in 36 of the 50 countries where it is most difficult to be a Christian is Islamic extremism. Last year we drew the attention of Parliament and the Foreign Office to the new trend of persecution in Africa, including states where Christians are in the majority. This year we reinforce that, emphasising that the most violent region for the persecution of Christians is the African Sahel belt.”

The report also highlights the extent and prevalence of persecution of Christians in failed states, which strongly indicates that freedom of religion or belief is a major casualty of civic and political breakdown – and, indeed, may also be a contributing factor to that breakdown.

North Korea remains the most restrictive country in the world to be a Christian. Like others in that country, Christians have to survive under one of the most oppressive regimes in contemporary times. They have to hide their decision to follow Christ: being caught with a Bible is grounds for execution or a life-long political prison sentence. An estimated 50,000 to 70,000 Christians live in concentration camps, prisons and prison-like circumstances under the regime of leader Kim Jong-Un. This month it was reported that as many as 33 people had been sentenced to death because of their alleged contact with Kim Jung-Wook, a South Korean Baptist missionary arrested by North Korean authorities in October on suspicion of trying to establish underground churches. It is possible they have been killed by now.

On March 4th, Open Doors hosted a parliamentary meeting highlighting the urgent need for progress on freedom of religion or belief in North Korea. A packed room heard a first-hand testimony about the plight of Christians in North Korea. Hea Woo, a North Korean refugee and Christian, gave a graphic and powerful account of her time inside a North Korean labour camp – where torture and beatings are routine.

“Sometimes we had soup with nothing in it, just full of dirt,” said Hea Woo. “In some places whole families were put into camps. They separated the men from the women…the guards told us that we are not human beings, we are just prisoners, so we don’t have any right to love…Even if people died there, they didn’t let the family members outside know. “

38 MPs attended with a further seven sending representatives in response to invitations from Open Doors’ supporters who live in their constituency. “I’m stunned and horrified by what has been shared today,” said one MP, “How can we do more to help?” Fiona Bruce MP, who co-chaired the meeting said, “We cannot stay silent. North Korea is in breach of every single declaration of the 1948 human rights bill.”

The Open Doors report will be shared widely among policy-makers and church leaders. It is through the knowledge and understanding of the realities and trends of persecution that we can continue to remember those for whom faith costs the most and begin to take action.

It is vitally important that governments in free societies do what they can to promote freedom of religion for believers of all faiths and none as a fundamental human right. Our government may not be able to directly stop the shocking human rights abuses going on in North Korea and other countries, but it is important that they, along with other countries who consider this to be a freedom worth protecting raise the subject on the international stage and let the perpetrators know that they are being watched and their crimes are not going unnoticed.

Back in November Baroness Warsi urged politicians to keep their word by ensuring that their national constitutions are met and that international human rights laws are followed: “Politicians do have a responsibility to set the tone, to mark out legal parameters as to what will and will not be tolerated. There is much more that we can do. There’s an international consensus, in the form of a Human Rights Council resolution on the treatment of minorities and tolerance towards other faiths. But we need to build political will behind that.

This is not a problem with a quick or easy fix, but progress can be achieved when governments and faith groups unite against these grave injustices and pledge to take action, presenting a united voice and standing up for those whose lives are being broken and ruined because of deep-seated religious intolerance that grips some cultures and societies. This all starts with awareness and we should therefore be incredibly grateful for those groups who are  constantly telling these stories of persecution and also actually providing support for those who are suffering for their beliefs. The international community has no excuse to sweep these violations under the carpet any more.

The full report is available from Open Doors – it can be downloaded here. 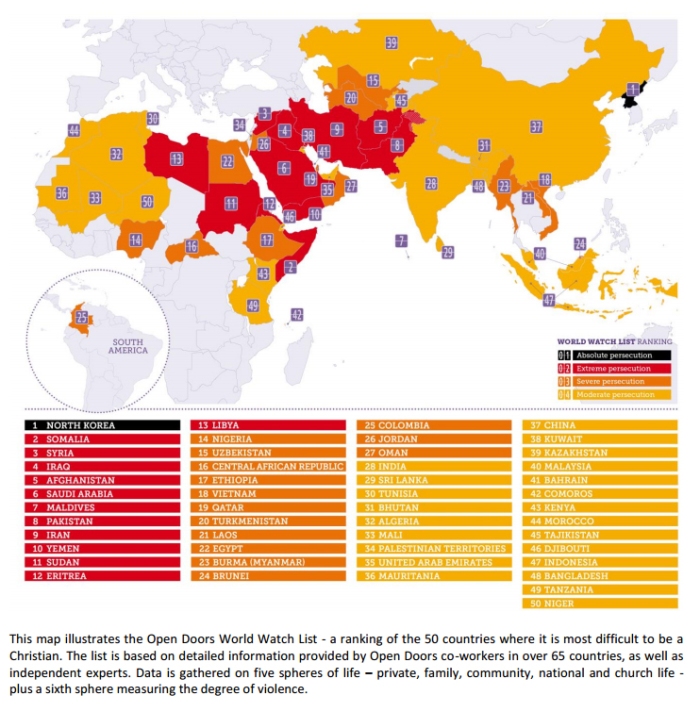 Like Loading...
‹ It makes perfect sense that vicars are ranked as the happiest people
9 years into an 18-month sentence and still waiting to be released: Life on IPP in the UK ›