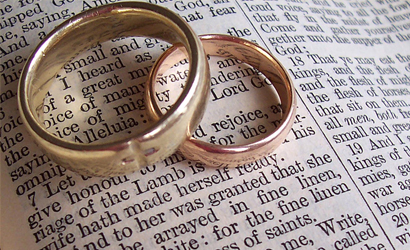 Last week’s release of the Church of England’s Pilling Report on human sexuality designed to initiate a process of dialogues in the Church of England has brought the conversation on same-sex partnerships back into the fray in Christian circles again. Of course how the Church deals with this has implications beyond its own internal circles. It’s a good time, therefore to go over the ground again and attempt to make some positive progress. This, the first of two posts addressing the subject, is written by regular guest contributor. Edward Kendall. Tweet @Edward_Kendall.

It is clear that Christians hold a spectrum of views on sexuality and marriage. However, the popular idea that there are two warring blocks that may be labelled ‘traditionalists’ and ‘revisionists’ is simplistic and can be misleading as well as unhelpful. Current tensions could be reduced and reframed significantly if more church leaders acknowledged the extent of common ground in the middle of this continuum, allowed limited flexibility of practice, and enabled their communities to develop practices of discernment oriented towards the “grace and truth” (John 1.13-15) that lies at the heart of the Christian message.

So begins a new paper from the left-wing Christian think-tank Ekklesia.

Founded in 2001, Ekklesia examines politics, values and beliefs in a changing world, from a Christian perspective. It has been a strong supporter of same-sex marriage, but through this research paper it is seeks to reach out to those who approach same-sex relationships from a range of perspectives.

‘Church views on sexuality: recovering the middle ground’, by Savitri Hensman, identifies and analyses seven widely held viewpoints on sexuality (focusing mainly on same-sex relationships) within churches of different denominations and traditions. It shows that even those with supposedly diametrically opposing positions often have more in common than they may at first realise – even though there are clear lines of substantial disagreement.

The seven main positions could broadly be described as:

Hensman sees positions 3 to 5 as the common middle ground. She writes:

‘In recent years, many theologians have argued the case for each of these three positions. At a leadership and grassroots level in various churches, many members have wrestled with the issue of sexuality and likewise come to hold one of these positions, sometimes shifting their stance. Some are still trying to decide which position seems best.

‘Supporters of position 3 might point to the unnecessary loneliness faced by many LGBT people who are persuaded to steer clear of committed partnerships by advocates of position 5, the loss of faith some experience and the damage to the church’s mission when it is perceived as narrow-minded and unjust.

‘Likewise supporters of position 5 might regard those who favour position 3 as encouraging a way of life that is ultimately unhelpful to the practice of Christian discipleship.

‘It can be hard work to be part of a faith community where sizeable numbers of people disagree on such matters. Yet churches hold together despite disagreement on a range of important issues, doctrinal and ethical. As in the days of the early church, unity need not be based on uniformity of opinion on all matters.’

Bishop Duleep de Chickera, recently Anglican Bishop of Colombo, Sri Lanka, is one of a number of church leaders who have already responded positively to the initiative.

“The seven positions are a fair representation of the spectrum in the Church and its reasoning is clear,” he says. What I like most is the reconciliatory thrust… A sensible and timely intervention.”

Bishop de Chickera preached at the opening service of the 2008 Lambeth Conference and spoke at the recent World Council of Churches’ 10th Assembly.

The Anglican Bishop of Buckingham, England, the Rt Rev Alan Wilson, a regular media commentator, has also personally welcomed the paper, adding: “Anything that helps people understand how they relate to this area of concern is good news.”

The proposal from Ekklesia for reconciliatory moves comes at the same time as the Pilling Report in the Church of England, which recommends some measure of positive accommodation, and processes of reconsideration going on within the Methodist Church, the Church of Scotland (Presbyterian), the Scottish Episcopal Church and others.

“The churches in Britain and beyond cannot afford to allow themselves to be dragged into many more years of internecine warfare over sexuality,” says Ekklesia co-director Simon Barrow.

“Savitri Hensman’s paper shows that there is a way forward for the great majority which acknowledges the reality of change, the possibility of mutual recognition, and the benefit of allowing Christian grace rather than fear and suspicion to guide the way differences among churches are handled.”

The paper finishes with this conclusion:

‘If churches can deal constructively with disagreement on this matter, it will surely also contribute to the overall quality of theological understanding and discussion. Meanwhile Christians sharing the ‘middle ground’ in the spectrum should be able to coexist, jointly seeking to make God’s love known and practised and allowing one another some measure of freedom, recognising their deeper unity in Christ.

Such a stance is not about weak compromise, but is in theological terms truly radical – that is, both deeply rooted in Scripture and tradition and open to the change and transformation that a living community requires in order not to be left behind by the God who, in biblical terms, is always ahead of us, inviting us to discover more of the ways of love, truth and justice.’

For far too long the churches in Britain have been weakened by factionalism and heated debate, especially over issues like sexuality. Like Bishop de Chickera, what I find most appealing about the report is its “reconciliatory thrust”, especially since Christians have been entrusted with the message of reconciliation. This report shows that whilst Christians may espouse a variety of views on sensitive issues, we are all one in Christ Jesus and as long as we keep hold of this there is hope for the future even despite our differences.

The full paper, ‘Church views on sexuality: recovering the middle ground’, can be read and downloaded here.

Like Loading...
‹ Now we are two
Senior MPs tell the Government to do more to prevent the persecution of Christians globally ›