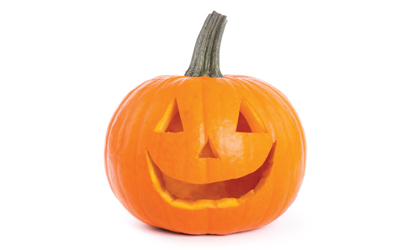 Today’s guest writer is the Revd. Canon J. John. J John is an internationally recognised Christian speaker and author. He has written over 50 books and spoken in 69 countries, teaching the Christian faith and  addressing over 300,000 people in person each year.  his series Just 10 (on the Ten Commandments) has now exceeded one million people in attendance.

In light of the recent media focus on Tesco and Asda’s ‘psycho’ patient Halloween outfits, J John is keen to raise a debate on the nature of Halloween. What messages are we giving to children who are encouraged to dress up as a ‘Zombie Pyjama Girl’ for example with blood soaked pyjamas and a slashed teddy and what is the impact of Halloween on society and on vulnerable people?

Halloween has become one of the biggest events in the British calendar. There have always been traditions associated with 31st October but the present extravaganza, with its epidemic of ‘trick-or-treating’, is a recent phenomenon. A decade ago, spending on Halloween in the UK was only £12m; now, boosted by Hollywood and marketing, it is £300m.

Financially, Halloween is now, after Christmas and Easter, our third highest grossing celebration.

Yet Halloween has seized this position without any serious consideration of what it stands for and whether or not we even want it. When people talk about what happens on 31st October a little phrase commonly heard is that Halloween is ‘harmless nonsense’. But is it indeed harmless? Is it merely nonsense? It’s time to do some hard thinking.

Let me give you six reasons why Halloween is not harmless:

Although people celebrate Halloween in different ways it remains, at its core, an event that glorifies the dark, creepy and scary side of life. Children and adults dress up as figures that are ‘evil’: witches, vampires, ghosts and demons. If you want to be different you can hire costumes to make you look like a chainsaw killer, a psychopathic butcher or even a shooting victim (‘with authentic-looking bullet holes’). This is hardly harmless. Whatever view we have about life, we all take it for granted that our society should spend time and energy encouraging children to care for others and to know the difference between right and wrong. Yet on this one day, we throw all those values away and glorify everything that is evil and unpleasant. Talk about sending out mixed messages!

We live in a world where every parent and teacher takes care to warn children that strangers may pose a threat and that they need to take precautions. Yet at Halloween we discard that rule and encourage children to go and knock on doors and accept sweets from strangers. Another mixed message!

No one is in doubt that evil is serious and that muggings, stabbings and serious accidents are horrendous. Yet, again, Halloween breaks the rules. On this day we pretend that death, deformity and injury are no more than kids’ play!

You could simply say that scaring kids is unhelpful, but there is a more subtle and troubling issue. Halloween costumes frequently centre on deformities, gory wounds and disfigurement. There are a number of websites that tell you how to create an effective disfigurement; for example, how to create realistic-looking burns and how to make yourself hideously ugly. Now consider how you would feel about that if you yourself were a burns victim, were severely disabled or had suffered horrendous scarring. Do we really want to spread the message that ugliness equates to evil?

5 – HALLOWEEN IS GETTING WORSE

Concerns about Halloween do not simply come from those of us with a ‘religious agenda’. Increasingly, other people are expressing concern, particularly about the way that Halloween seems to be getting darker and nastier every year. Carved pumpkins were, I suppose, pretty harmless; the new blood-stained axe murderers are not. If we don’t like the direction that Halloween is going in, then maybe it’s time to stop celebrating it.

In some older Halloween traditions people dressed up in clothes that made them look evil and then, at the end of the evening, the outfits were burnt. The message was clear if naive: in the end, good triumphs over evil. Yet there is no hint of that in the modern Halloween. Now, evil is unchallenged and just slips away into the darkness, to return at some other time. That’s not the message our world needs today.

SO IS HALLOWEEN HARMLESS?

The evidence suggests that it isn’t. Halloween encourages lots of bad things and offers nothing good in return. Halloween is harmful and there is no wise reason to keep it.

I want to suggest that far from being harmless nonsense there are also spiritual risks associated with Halloween. Although all sorts of things get dragged into Halloween these days, its core remains a preoccupation with supernatural evil. The heart of Halloween is the occult: witches, ghosts and spirits. If you are inclined to dismiss this argument then before you do so you might want to do some thinking first.

Perhaps you are someone who would say that they do not really know whether God exists or not. If this is you, then may I ask why you would want to take a risk with Halloween? People talk of the ‘precautionary principle’, that useful rule which can be summarised as ‘when in doubt, don’t’. It’s not a bad rule to follow when it comes to Halloween.

If you are a Christian, you won’t need me to tell you that anything associated in the slightest with the devil, witchcraft or supernatural powers ought to be rejected. Most of the world, most of the time, has recognised that there are good spiritual powers and bad spiritual powers. The Bible, in particular, is very clear that the world is not a neutral place but a battleground between good and evil. Now when popular fiction and Hollywood talk about supernatural evil this refers to its most spectacular form: poltergeists, ghosts and demonic possession. That sort of thing does occur but evil is far more widespread as a subtle, corrupting force that can influence and affect us. Playing safe is wise. The apostle Paul summed up the attitude that we should take in one of his letters: ‘Stay away from every kind of evil’ (1 Thessalonians 5:22, NLT).

The Bible warns of supernatural evil. It also teaches us of the only power that can conquer evil – Jesus Christ. The Christian faith affirms and history testifies to the fact that God sent his son Jesus, who was God in human flesh, to conquer evil and death once and for all. Jesus went to the cross to defeat the power of evil and the grip of sin in this world. Proof of his victory over evil powers was given in his resurrection from the grave on the first Easter Sunday. The apostle Paul writes this about Jesus in one of his letters: ‘And having disarmed the powers and authorities, he made a public spectacle of them, triumphing over them by the cross’ (Colossians 2:15, NIV). For two thousand years Christians have known deliverance from the power of evil through the name of Jesus Christ and the power of God’s Holy Spirit.

If you have been involved in the occult, if things that have happened to you at Halloween or at other times have left you with unease or bound by evil powers, then I urge you to turn to Jesus Christ.

Like Loading...
‹ Clearing up the mess that deliberately alarmist journalism leaves behind
The C of E goes looking for ‘God-doing’ at the party conferences – and comes away impressed ›