The news earlier this month that a Syrian Catholic priest had been killed accompanied by a video alledgedly showing his beheading unsurprisingly led to a great deal of outrage and upset.  The video is now believed to have been filmed in a different location several months before, but the confirmation of Father Francois Murad’s death has been another stark reminder of the shocking mess that all Syrians find themselves living in, with the fate of Christians  in an especially perilous condition. The number of refugees is now estimated to be over 1.6m.

The Christian NGO, Open Doors have been busy this week raising awareness of the plight of the Syrian Church in Parliament and also at the Church of England’s General Synod.

Tuesday night saw the agency introduce its most recent advocacy report, Syria: church on its knees at a meeting in the House of Commons. The report addresses the evidence and increasingly worrying reports of Christians being deliberately targeted in Syria. Hosted by Naomi Long MP, Alistair Burt, Foreign Office Minister for the Middle East and North Africa gave a keynote speech at the event. Speaking to Open Doors supporters and MPs from across the parties he addressed the current situation and how the UK government were responding. He also highlighted the ‘Save Syria’ petition, which has already seen over 30,000 signatures. 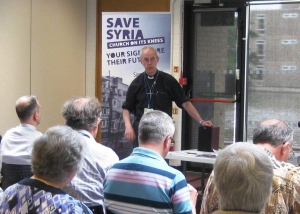 The day before at a Synod meeting the Archbishop of Canterbury said that: “It’s absolutely clear that Christians in Syria are being persecuted, we know for example that in many areas of Aleppo, historic Christian areas since the first century, people are being chased out in large numbers. I would encourage people to pray very strongly, continue to pray and to support this kind of campaign and to write to MPs asking them to think very carefully about the wisdom of supplying further weapons to an area of such complex and extreme violence.”

The church in Syria is rooted in the very origins of Christianity. Jesus ministry around Galilee caused ‘news about him to spread all over Syria’ (Matthew 4:24). It was in Antioch – then capital of the Roman province of Syria – that followers of Jesus were first called Christians. The Apostle Paul was converted on the road to Damascus, as he travelled intent on rooting out all trace of Christianity. From that point Ancient Syria was a heartland of Christianity for 700 years.

By the 8th century virtually the whole population were Christians, though under the Islamic Caliphate. In 855, an increase in taxation prompted a revolt by Christians in Homs: its suppression was brutal, its leaders crucified at the city gates and churches burned down. The Crusades brought further Christian-Muslim conflict to Syria. By 1350 there were just 100,000 Christians, 10 per cent of the population.

Until the recent conflict began the proportion of Christians in Syria has been around this 10 per cent mark in a population of 22 million.  Since 1971,  the stability of Syria has depended on the dictatorship of a highly structured one-party system closely tied to the armed forces and the intelligence services. The Ba’ath Party, an Arab ultra-nationalist movement originally cofounded by a Syrian Christian, is committed to secular government – in 1973, when Assad dropped the constitutional requirement that the president must be a Muslim, the army had to suppress the rioting that followed – and has relied on religious minorities to maintain its power in a country that is about 74 per cent Sunni Muslim. Those same minorities, therefore, have had a powerful vested interest in supporting the Ba’ath Party and President Assad.

Christians are proportionately better-represented among the higher-educated and higher-income parts of Syrian society, and have been significant participants in economic and political life. There are Christians who are officers in the Syrian Army – which is  organised on a non-sectarian basis.  Before the crisis Christians were tolerated as a respected minority and had freedom of worship – though every Christian meeting was monitored by the secret police, and most denominations were unwilling to take the political and religious risk of openly engaging in evangelism, often formally agreeing not to evangelise among the Muslim population.

The whole Syrian population is clearly vulnerable in a number of ways, but as the momentum from protest to civil war to regional sectarian conflict grows, so the evidence grows that the Christian community in Syria is particularly vulnerable and increasingly specifically targeted.

Christians feel particularly vulnerable to the threat of kidnapping for ransom that has become all too common an occurrence. Many are convinced that their community is targeted simply because of their religious identity; others suspect that it is the Christians’
reputation for being wealthy that is to blame.

“The absence of the rule of law causes Christians to be one of the least, if not the least, protected minority in Syria,” says Abdulmesih BarAbraham of the Yoken-bar-Yoken Foundation, referring to the numerous abductions of Christians in all regions in Syria to extort money. “Local criminals have taken advantage of the chaotic situation and executed violence against Christians.”

There is a similar discussion within the Christian community as to whether Christians are being generally targeted because of their faith. When journalist Nuri Kino interviewed refugees in Lebanon, many were convinced that the opposition had been taken over by Islamist extremists determined to create an Islamic state. He reports one woman saying, “My son and my husband were both viciously killed, shot in the head by terrorists, Islamists.” When he asked her if they had a quarrel with anyone in their home town, she replied, “Our only crime is being Christians.” This prompted another refugee to interrupt: “In certain parts of Syria a Christian can no longer report injustices or crimes. We are hostages of the growing Islamism while the rest of the world either watches on or turns the other cheek. Just being Christian is enough to be a target.”

An Open Doors field worker says: “The opposition is seeing minorities that did not take their side, even if they were not taking the side of the regime either, as traitors. Christians, in general, fall under this category and thus they have become a target.”

One church leader reports, “There are areas where Christians have been intentionally displaced. And once the Christians have left they have destroyed their homes, their churches and everything; this is a clear message that you are not welcome to come back again. “In one instance,” he continues, “there was a half Christian, half Muslim town, with around 7,000 Christian families there. And from the minarets they told the Christians to leave, otherwise they would be slaughtered one by one.”

Thus many are leaving the country. Others become internally displaced. And with every incident and every month that passes, it becomes harder for them to envisage returning home.

Undoubtedly a majority of the Christian community have maintained tacit support for the Syrian government. But it is also true that Christian communities participated in the initial political demonstrations against the al-Assad government, hoping for greater political freedom and social rights.

But many Christians want to stay outside the conflict; they have no wish to take sides. The result is that they find themselves trapped in the middle. Brother Said, pastor of a Syrian evangelical church in Rotterdam says, “The situation of the Christians is very tragic. They are stuck between two evils, between two fires.”  Another Syrian pastor has said, “As Christians we have heard openly that there is no place for us here, and we do not feel welcome from either side. There is a lot of fear among the Christians.”

The talk of the church in Syria facing the possibility of almost complete destruction is not an exaggeration.  If hardline Islamists are able to gain power then the chances of this becoming a reality will only increase.  The consensus from a range of sources is that if Western governments intervene by arming the rebels opposing President Assad, the church is bound to pay a heavy price.  The Open Doors report says that ‘any Western intervention in Syria would likely supply the death warrant for the ancient Christianity of the Middle East.’

President Obama and David Cameron have both openly talked of supplying arms to the rebels since the international arms embargo expired, but thankfully this is being met with opposition from many politicians.  We all want to see a peaceful end to the conflict in Syria, but an increased supply of weapons will not bring stability any closer.  For the sake of all Syrians our leaders need to act carefully and with consideration.  For the Syrian Church it could well mean the difference between life and death.  Their plight mustn’t be ignored.