Time for a quick review of the new app from Tearfund released this week.

Nudge is the sort of thing that I’ve been hoping we’d see  for a while now. Tearfund like other NGOs takes lobbying and campaigning seriously, but when it comes to getting the message out, spreading the news and getting supporters to take action is of course vitally important.  We can send postcards to MPs and the Government, which is fine if you’ve been given one.  We can also email our MPs through Tearfund’s website if we remember to look every few weeks to see what’s happening.  And now we have an app for mobile devices that has potentially just made the job of campaigning a whole lot easier and effective.

Tearfund are certainly pleased with Nudge.  The launch press release talks up its potential:

Campaigners can now change the world from the palm of their hand, with the new Nudge app launched today by Tearfund.

“With the Nudge app you reach powerful decision makers in an instant, nudge all those you couldn’t find before, or were slow to reply,” says Craig Philbrick, who created the app at Tearfund. “Think of it as democracy in the palm of your hand.”

The app makes it easy to lobby MPs, petition governments and share latest campaign news. It gives you the option to instantly share the issue with friends on Twitter and Facebook, where the impact is tripled.

“I imagine if Wilberforce was around today he would be using the Nudge app,” says Andy Flannagan, the songwriter and activist. “It’s social media that tackles injustice rather than help you hide from your real neighbours. Tearfund’s app is a great little pocket protester.”

“Nudge is the latest tool to help empower more people to speak out about the things that matter in society,” adds Craig. “We know that campaigning changes the lives of some of the poorest people around the world. The app will make a real difference in how people participate in this change.”

So what’s it like and is it any good? 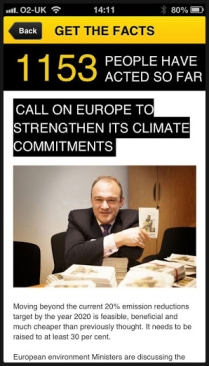 The app is divided into three sections; Get the Facts, Take Action and Share.  In the settings you can also store your contact details, which means that you won’t need to enter them each time you email an MP, which is very helpful.

This sort of app works well when it’s quick and simple to use.  At the moment there are two campaigns and once one is selected the Get the Facts page gives you a brief but helpful overview of what the campaign is about.

You then move on to Take Action where you can see the email that will be sent and personalise it.

This is always the difficult bit for me as they are usually well written and it takes some thinking trying to work out if and how to change it. 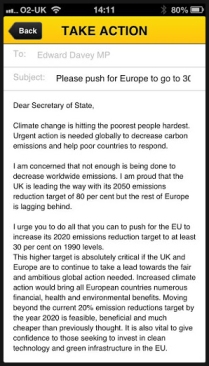 For some reason though, the IF campaign email stopped letting me edit it after the first sentence.  After several attempts I gave up and just sent it as it was.  I’m hoping this was just a glitch for

this one as the Climate Commitment email was

able to be edited freely and I was able to make a few alterations.

Once the email has been sent, you then get to instantly tell your friends on Twitter and/or Facebook that you’ve just taken action using an automatic update that encourages them to do the same.

This is potentially the most powerful aspect of the app as it allows the message of campaigns to be spread effectively and rapidly, giving others the chance 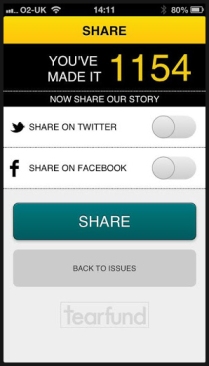 to join in even if they haven’t got the app themselves.  The only downside I’ve found with the Share page is that you have to do the sharing straight away.  If you want to do it later or again, the app won’t let you.

Online campaigning really is the way forward and has so many advantages over paper based methods.  Tearfund’s Nudge certainly does have a great deal of potential.  With the Push notifications turned on you’ll hear of new campaigns as soon as they are released and it’s now far easier to respond wherever you are.  It’s not perfect, but it’s definitely worth sticking on your mobile devices if you care about this sort of thing and want to do what you can to make sure that politicians pay attention and act accordingly.
.

Nudge is available for free on iPhone and Android platforms:

Like Loading...
‹ Become a mini-marcher and join Fairtrade Fortnight’s new campaign
If the G8 leaders were children, what would they care about? ›