Fairtrade Fortnight 2013 (25 Feb – 10 Mar) has now begun!  This year we’re being asked to sign Fairtrade’s petition to tell David Cameron to champion a better deal for the world’s smallholder farmers when the UK hosts the G8 summit in Northern Ireland in June.  When you add your name you’ll be invited to create a Mini-Marcher – your virtual self in miniature, which will then be sent off to a march on Parliament Square to make sure he gets the message.  It’s quite a laugh designing yourself in paper form and it’s a really important cause, so why not give it a go? 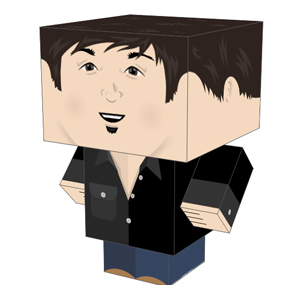 This is my version of me, which I think came out pretty well.  You can get involved HERE.

If you want to know more then this week’s blog from Fairtrade Chief Executive, Michael Gidney, fleshes out the detail:

It‘s Fairtrade Fortnight and this year, we’re ramping up the pressure. It is nothing short of a scandal that half of the world’s hungry people are the smallholder farmers who produce 70% of the world’s food, as our new report Powering Up Smallholder farmers to Make Food Fair makes clear. The fact that so many hungry people are food producers shows just how unbalanced our global food system has become. It’s madness that we allow  hunger, poverty and exploitation to continue to scar the lives of millions of food producers, while in the UK we throw away one third of the food we buy.

We’ve joined 100 other NGOs in the Enough IF Campaign, because we believe there’s a real opportunity to make 2013 the year we say enough is enough to the insanity of our broken food system, and recognise the power of small farmers to be part of the solution. After all, what is Fairtrade about, if not the power of the possible?

Look what happens when people take power into their own hands. From campaigners cajoling local supermarket managers to stock the first Fairtrade products in the early days, to the huge London 2012 Games commitment to source 100 per cent Fairtrade tea, coffee, sugar and bananas, together we have built a market for farmers and workers now worth over £1.5 billion in the UK – the biggest anywhere in the world.  The growth of Fairtrade is an incredible achievement by consumers who care and by enlightened companies  – together they have managed to show that another way of trading is possible, even in a crowded marketplace. Now bigger companies are following that lead – it is truly inspiring that the tail of the economy can wag the dog in this way. More recent entrants into Fairtrade have in turn have created new opportunities for producers and the combined impact is better business for all.

Five years ago, we and our partners set out on a mission to expand the reach and impact of Fairtrade in Africa, a region that has been woefully underrepresented in international trade.  Today, more than 60 per cent of the 1.24 million farmers and workers involved in Fairtrade are in Africa.

Fairtrade is helping create a more level playing field for them, but it is smallholder farmers and workers themselves who have shown what can happen when they have a shot at the goal.

Take the 8,000 tea growers who own the Iriaini Tea Factory in Kenya: they used the confidence and business prowess they gained from selling on Fairtrade terms to start packing their own tea at source. With support from the UK government and Marks & Spencer on their journey from tea pickers to packers, they now earn an extra $2-3 per kilo, capturing more value where it is needed most. This in turn has inspired them to diversify into the local and regional market – Iriaini packed tea will be one of the first Fairtrade certified products available in East Africa. It’s win-win – supermarkets get a finished Fairtrade certified tea product and Iriaini farmers have a growing business which is moving up the value chain and diversifying, balancing risk with opportunity in different markets.  It’s just one example of the power of collaboration – putting value and ownership back into the hands of producers. And it is this dynamism and energy which enables Fairtrade to have such an impact.

So today, we’re calling on the UK public to go further for Fairtrade in two ways. Firstly by continuing to bring about change through the power of our purchasing. What greater impact could we achieve if we each took just one more step to buy across the growing range of Fairtrade products? Is your local shop offering all the Fairtrade products you would like to see? If not, take that step this Fortnight and ask the manager. Secondly, let’s join with producers to call on the G8 governments to go further for smallholder farmers so often marginalized by global trade. Sign our petition and create your own personal mini-marcher to call on David Cameron to champion a better deal for small farmers – watch this film to check out our plans to take Parliament Square by storm with an unprecedented act of foldable Fairtrade genius!

Our new strategy to 2015 is called Unlocking the Power of the Many. We called it that to recognise that together – producers, businesses and the UK public – we hold incredible power to deliver even greater impact and wider change, to learn from the past and adapt for the future. Let’s use it. Let’s unlock that power and change trade for good.

Tags: David Cameron, Enough Food for Everyone IF, G8, smallholder farmer, Unlocking the Power of the Many