Very occasionally I read about a conversion experience that totally grips me.  Today has given me one of those moments.  This time the conversion has not involved finding Jesus, but it has still provided an incredible story of turning your back on a former life.

Martin Daubney was the longest serving editor of Loaded, considered by many to be the original Lads Mag.  Its mix of laddish humour, features, football and most of all sex won him numerous awards, but also huge numbers of critics.  Daubney says:

“we’d spent a lot of time and money talking to our readers in research groups, and they’d repeatedly said Loaded’s winning formula should be ‘more birds, less words’.

“The average Loaded reader — largely white, working class, 20-something blokes — had a simple palate, so we gave them what they wanted.

“To me, it was harmless fun, dictated by market forces.

“What’s more, I was paid more money than I’d ever earned in my life to do it. I’d always dreamed of editing Loaded and vowed to do whatever it took to stay there.

“I never stopped to consider issues like the crass sexualisation of women.

“Moral naysayers were party poopers, and if they attacked me, I’d attack them back — harder.

“Back then, it never once occurred to me that we were objectifying women or doing any harm. I fiercely denied that Loaded was a ‘gateway’ to harder pornographic magazines.

“When I became editor in 2002, I realised all our readers really wanted was acres of flesh.

“Loaded’s sales plummeted, so we turned up the volume even further in a desperate bid to stay alive.

“When you go down that road, there’s no turning back. The magazine was getting grubbier to the point where even I didn’t want to be seen with it on the Tube.”

He goes on to talk about his dramatic change in views when he became a father:

“I started seeing the women in my magazine not as sexual objects, but as somebody’s daughter. Some of Loaded’s models had children themselves, and I’d think ‘what’s your kid going to think of you when they’re old enough to understand Mummy used to get her boobs out for a living?’

“To think that the girls who posed for our magazine had once had their nappies changed, had once been taught to take their first steps and had once been full of childlike hope . . . it was almost heartbreaking.

“Offering excuses for pornography when Loaded was attacked left me feeling cheap and hollow. I became a person I wasn’t, and, looking back, one I didn’t like. Today, I find myself agreeing with some of my fiercest former critics.

“Let’s be clear: you can’t ever ban pornography. Like tax and Tory U-turns, it is painfully unavoidable and lots of consenting adults consume it of their own free will. But we must tighten up the current laws to make it unavailable to children, as it can be so damaging.

“How will these tainted children be able to interact with real women later in life if the first ones they ‘meet’ are on-screen mannequins? By allowing children free access to pornographic images, the next generation of young men are becoming so desensitised, I genuinely fear we’re storing up an emotional time-bomb.

“And most shocking of all is the total lack of moral accountability displayed by the internet pornographers when it comes to supplying their product to minors.

“Yet the internet pornographers laugh in the face of this, and the internet service providers (ISPs) wash their hands of the problem.

“It’s like saying supplying a drug is ok so long as you don’t manufacture it. There’s no accountability, and it needs to be cleared up, fast. Isn’t it time the ISPs were held to task?

“The internet and its morally redundant pornographers have changed all that. It is time our policy-makers cried ‘enough!’ and banged them to rights.

“Two years after my exit, I can finally admit that I was part of the problem. By speaking out, in some tiny way I hope to be part of the solution.”

You can read Martin Daubney’s full story at the Daily Mail’s website and I strongly recommend that you do.

If those needing ammunition to persuade the ISPs to make the protection of children a priority by requiring customers to actively choose to access adult content and allowing them to easily protect all of their internet enabled devices, then surely this is it.  If someone who has been so close to the action demands change, then how much more evidence is required?

As I’ve written about before, If the ISPs continue to drag their heels on this issue (which the majority appear to be doing) then we need the Government to not back down but follow through on its intentions to make them change the system.  If you haven’t done it already I would encourage you to sign the Safety Net petition, which now has over 84,000 signatures.

If further evidence was needed as to the way our culture continues to be sexualised, there’s been an outcry on Twitter this weekend over some of New Look’s latest T-shirts for men with scantily clad women on them such as this one of Kelly Brook in a see through top (blurring my own). 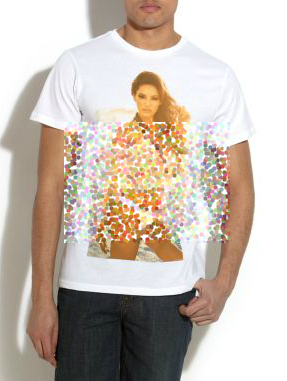 New Look has a history of working with charities and states that its charitable foundation works to make a difference by “helping people to help themselves and their friends by tackling anxieties linked to such issues as eating disorders, obesity, body image, bullying, alcohol or substance abuse, sexual health, domestic violence or gun and knife crime.”

All good and I support such work, but how can they be doing this on one hand and then on the other encouraging men to wear T-shirts that display large images of women that aren’t far off what you’d expect to see on Page 3 of the Sun.  Something definitely doesn’t add up here.  You can read a more detailed response to this here and there is also a Facebook page asking New Look to withdraw their T-shirts.

If things have changed this much in the last ten years, how much further do things have to go before we truly appreciate the mess we’re in?

Like Loading...
‹ When will our main political parties start taking Christian voters seriously?
Finding a biblical framework to heal society’s division between the generations ›